Michelle Cruz Gonzales, a Xicana writer,  writes memoir and fiction. Born in East LA in 1969, MCG grew up in Tuolumne, a tiny California Gold Rush town. She played drums and wrote lyrics for three bands during the 1980s and 1990s, Bitch Fight, Spitboy, and Instant Girl. Spitboy, not a riot grrl band,  toured extensively in the US and overseas and released several albums.

The author of The Spitboy Rule: Tales of a Xicana in a Female Punk Band, PM Press, MCG earned degrees in 2001 and 2003, in English/Creative Writing from Mills College, where she also minored in Ethnic Studies. She has been a regular contributor to Hip Mama Magazine, published by Seal Press in Book Lovers Anthology: Sexy Stories from Under the Covers , in the Listen To Your Mother Anthology on Putnam, and her story “Juan, El Pájaro” one Honorable Mention in Riversedge Literary Journal contest. 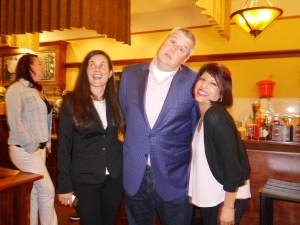 Currently, MCG is at work on a satirical novel about forced intermarriage between whites and Mexicans for the purpose of creating a race of beautiful, hardworking people. She lives with her husband, son, and their three Mexican dogs in Oakland, California.