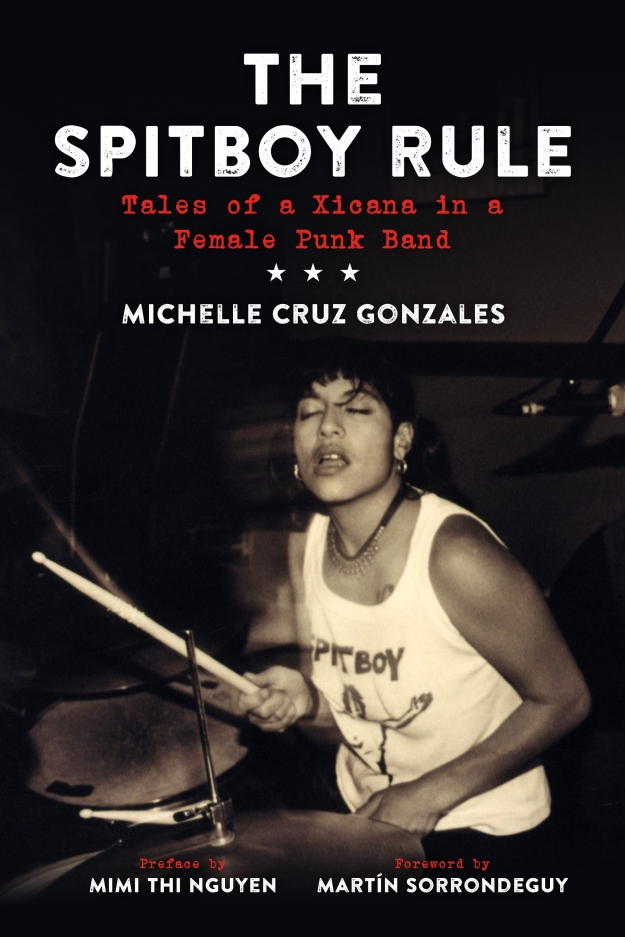 “So when news emerged last year that The Spitboy Rule: Tales of a Xicana in a Female Punk Band was set to be released this spring, I kept track of the date, and picked up a copy as soon as I was able to do so. The result is a terrific collection of stories from the road, measured thoughts on the dynamics of class, gender, and race that existed both within the band and the punk scene of the time.”

Red Wedge: More Than a Riot – An Interview With Michelle Cruz Gonzales

” Gonzales’ new book Spitboy Rule: Tales of a Xicana in a Female Punk Band (PM Press) defies expectations once again. People of Color have been part of the punk scene from the beginning. Gonzales is part of a lineage that includes Detroit’s Death, The Bags (Los Angeles), Poly Styrene and Pat Smear. Spitboy Rule makes the invisible visible. It is both a walk down counter culture’s memory lane as well as a serious exploration of identity, gender and race.”

Feministing Reads: The Spitboy Rule-Tales of a Xicana in a Female Punk Band

“Many of us have dreamt of starting a badass girl band. Few of us have been as public and reflective about the process as Michelle Cruz Gonzales, who had no idea picking up a guitar in rural Toulumne, California would lead to a life-long journey in punk feminism. So who better than to write about the complex topics of authenticity, creativity, and race in feminism than Gonzales, known professionally as Todd, the Xicana non-riot grrl drummer from Spitboy?”

KQED ARTs: The Struggles and the Victories of a Xicana in a Hardcore Band

“What’s most refreshing about The Spitboy Rule is Gonzales’ ability to closely examine the class and race issues woven through the mid-’90s Bay Area punk scene. Yes, she found community, friendship, and unfettered artistic expression with the band. But, as she writes, she always felt like an outsider; the only woman of color amidst all white women. The only band member who didn’t come from a fairly comfortable middle-class background.”

“The Spitboy Rule follows the difficult and courageous journey of a young woman who wasn’t afraid to venture into a mostly white underground scene, to hold mirrors up to the faces of her worst critics.”

“Michelle Gonzales and The Spitboy Rule challenged the notion of who gets to speak and whose stories are told. Whether they wrote about misogyny, sexual assault, or violence against women, the band confronted the idea that women in punk needed to shut up and spread their legs or play.

Gonzales’ memoir isn’t just for fans of punk music. It’s for everyone who ever knew they deserved better and fought to reclaim their identity. It’s about the experience of playing your fucking heart out as a woman and finding the language to finally tell your story.”