Madison, Wisconsin is such a great city. I can see why people love it there. We stayed with Jen Rubin who wrote “The Meat Grinder,” which is in the Listen To Your Mother anthology, along with Dana Maya’s Mother: a Multiplication Lesson.and my “Does Your Mom Play Drums?

The last time I was in Madison was when we played the Fang Gang house garage, a show organized by Karoline Collins who would later go on tour with us as roadie and photographer. She took the great shot of on the cover of the book and a bunch more, including the photo of me at the Fang Gang house on page fifteen of the book, the photo for the story “Punk Points.” I vaguely remember playing that show in the hot sweat basement, and I remember taking a walk to the lake with Aaron Cometbus after the show. It was dark, so I couldn’t see the lake well, but I did get bitten by a bunch of mosquitos.

On Tuesday, Jen Rubin took us to the Terrace at the lake just before the sun went all the way down. We saw a beautiful pink and purple sky over the water, the wide expanse of lake Manona, and lightening bugs. If I wasn’t going to get bit by mosquitos, I could have stayed out all night to watch the lightening bugs flash off and on and, surprising me each time. My son scoffed at me for gasping each time another one sparked it’s light, but I couldn’t help myself.

The reading was intimate, and it took place in the Village Community Housing community space. I read two pieces – one was “The Threat,” which addresses female stereotypes and how freaked out Spitboy was the first time we heard our backing vocals recorded live, and it went over surprisingly well. There were about 20 people there, which is actually a few more that are at most Bay Area readings. My Listen To Your Mother hermanas, Jen Rubin, Dana Maya, Araceli Esparza, and the LTYM founder Ann Imig. There were also to teenage girls, Dana’s daughters, who have each already written their own novels and had them self-published! They bought a book to share and one for their friend. I’ve heard a lot of adults say that young people don’t read, but this isn’t exactly true, is it?

We got up quite early in Madison on Wednesday, went to Walgreens to get Ines’ thyroid medication, which had forgotten at home and been trying to get since Minneapolis, and then we hopped on the 90, and headed to Chicago. Driving to Chicago was just like I remember it. There are a bunch of signs that say you’re in Chicago way before you ever get to where you’re actually going. Our first stop was Independent Publishers Group, one of the PM Press distributors. I had to pick up books to sell, and when I went to the bathroom, I walked through stacks and stacks of new book waiting to be shipped off to books stores all around the country. I wanted to go and browse the stacks, but I didn’t because, after all, it’s not a library.

We got to Martin’s apartment in Chicago around 12:30 or 1:00, which gave us lots of time to relax, visit, prepare, and drink wine before the reading. We did realize later that we should have gone and done a bit of sight seeing, but Ines and I took our son to see the Bean in Millennium Park and to walk a bit along the lake this morning before hitting the road again. 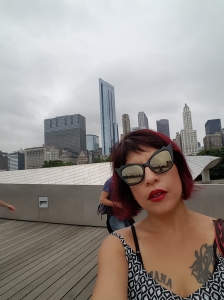 The reading was at a café called La Catrina in Pilsen, the part of the neighborhood that Martin said is becoming more and more gentrified. Martin, at my request, opened, not with a boring bio, but with the forward that he wrote for the book. I’ve always wanted to hear him read it aloud, and I hope it wasn’t too self-serving to ask him to read it, but I sort of had the idea because Araceli in Madison had commented on what a great piece show was, and home much she liked it even though she usually never reads forwards to books. All 94 people who said they were going to come out did not come out, but there were well over 40 super attentive people there who asked a lot of great questions, which I answered, sweating a lot, under hot stage lights (Spitboy used to call them French fry lights) amidst a sudden thunder and lightening storm that produced torrential rainfall that raged as the reading ended and we ran to our cars.

Tonight I read in Iowa City, Iowa, at Prairie Lights Books, and I was interviewed and written up for an article in the Daily Iowan – thanks, Tessa Solomon!