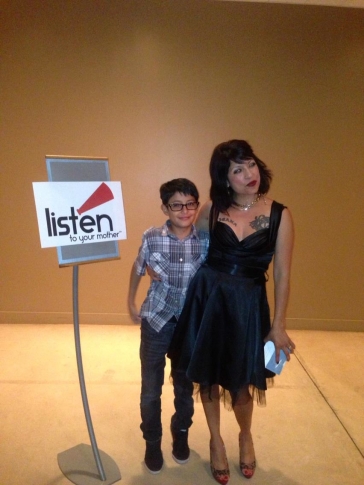 MCG and her son LM after the show

When I was playing drums in a punk band, rocking out in a tank top and no bra, or just a bra and no tank top, I didn’t imagine my favorite performance would be with my ten- year-old son.

For three years, Luis Manuel played piano in his school’s variety show. In fifth grade, he decided to play guitar. Guitar was way cooler. He had taught himself to play guitar in like three months, you know, on youtube: chords, notes, picking, everything. He was going to play a rock song for the variety show; Sean was going to play with him. They began practicing three months before auditions because they didn’t want to suck and they had girls to impress.

Then Luis heard a rumor that Sean wasn’t going to play with him.  When he heard it again, I suggested he find a third person for his act just in case, but he said maybe Sean was just too busy to practice. Then two days before the audition, only two weeks before the actual show, Sean admitted that he was going to be in a dance act with his popular friends instead.

A dance act? Who in the hell would rather do synchronized dance moves like some boy band over playing actual music? It occurred to me that for fifth graders this variety show had more to do with showcasing your friends than actual talent.

“Do you want to be in their dance act?” I asked.

He rolled his eyes. “No, I want to play guitar.”

In tears the night before the auditions, Luis sat on the couch with his Les Paul.

I took a deep breath to hide my panic; then I told him to play every song he knew. I would help him decide which sounded best. He played “Float On” which needed another guitar, The Beatles’ “Blackbird,” sounded good, but the picking needed work, and the Weezer song had one really hard chord. When he played Nirvana’s “Smells Like Teen Spirit,” we both knew it was the one.

Then it hit me. Luis’ participation in this event had become our family’s way of not being totally invisible. I worked full-time and made an effort to be involved, volunteering in the classroom and going on field trips when I could, but I was not part of the blonde moms’ crowd, the stay-at-home moms’ crowd, or an attending member of the PTA. I was the Chicana with chest tattoos married to a dark-skinned Mexican with an accent. I wasn’t going to let some fucking dance routine, keep my son from changing his mind about performing in that show. Besides, I knew he wanted to.

“I just wish I had someone to play with.” He looked dejected.

“You know, I can play that song on drums in my sleep.” I tried sounding nonchalant. But it was true, anyone who played rock drums in the 90’s had learned to play that song, had wanted to rock as hard as Dave Grohl.

“Look, I know you don’t think it’s cool to be in an act with your mom, but the auditions are tomorrow; there’s no one else.”

“Okay, “ he said, sounding the way you do when you know you’re totally out of options.

I wanted to hug him, jump off the couch, plan our outfits, and gush about how fun it was going to be, but I restrained myself.

“What if someone teases me?”

“Just say this: “Does your mom play drums?”

Still nervous that he was going to be teased for being in a band with his mom, I knew I had to tone it down, wear a loose fitting tank top and a bra, and no flashy make-up. I did put on red lipstick called “Rocker” before leaving the house. I wanted to stand out from the PTA moms and help my son show his friends what real and inspired talent looked like. Getting on stage and playing the drums in front of the entire school without lipstick wouldn’t achieve that.

“Next, we have Luis Manuel Peralta playing ‘Smells Like Teen Spirit,’” the MC on other side of the curtain read from the intro we wrote,  “and no, that’s not his mom on drums.” I heard loud laughter, the curtain lurched open, and Luis launched into one of most recognizable chord progressions in rock and roll, drawing whoops and cheers from the crowd. Then I came in on drums, careful not to hit the snare as hard as I could or move my head wildly as I had in my band Spitboy.

Like we practiced to combat nerves and to help us stay together, we made eye contact across the stage, mother and son. I nodded as we made the transition from the intro to the soft part that follows, and by the time we got to the distinctive chorus, da, da, da diga, diga, diga, da,da,da, the crowd was roaring. Luis looked up from his guitar, and I saw his anxiety slip away. Then as we wound down for the big finish, Luis locked eyes with me and smiled wide like he did when I nursed him as a baby. The crowd went wild and Luis’ girlfriend swooned in her chair; his friends in the dance act jumped to their feet and clapped; my husband stood at the front of the stage with the camera grinning, and lots of other husbands rehearsed what they’d say as they approached me afterwards. And me and my son punctuated the end of the song, hitting each beat together, ba, ba, ba.

This piece was written specially for submission for the cast of Listen To Your Mother, of which I was member with thirteen other women who told their stories too. Special thanks to all my LTYM sister — what a great adventure!