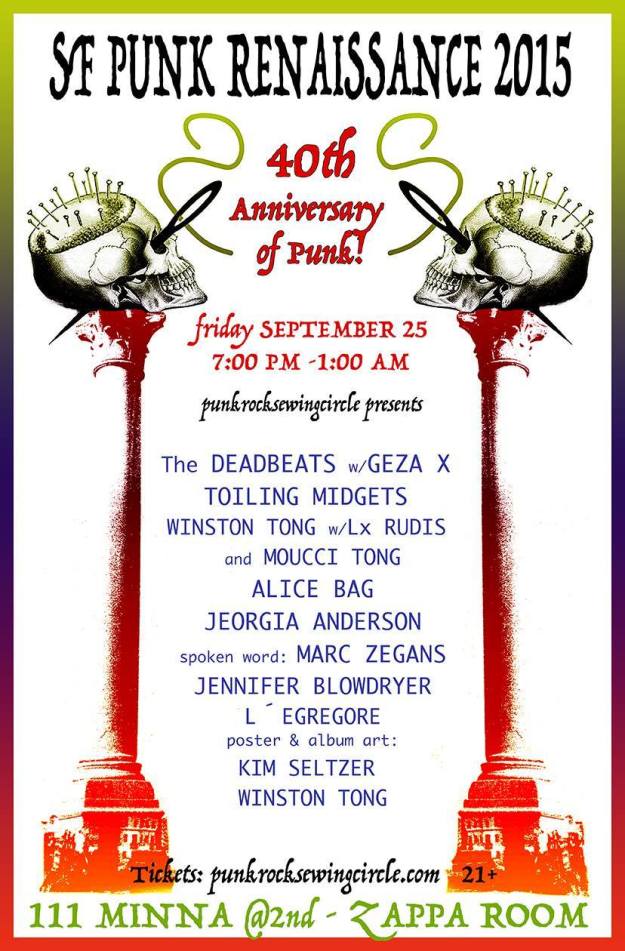 You may have heard by now that I’m playing drums in Alice Bag’s band September 25 at 111 Mina in San Francisco for the Punk Rock Sewing Circle’s 40th Anniversary of Punk show.

What you don’t know is that I have signed on to play this show, and I’ll only get to rehearse once with the band before we hit Zappa Room stage. Alice sent me a link to the tracks of the songs we’ll play on Soundcloud, and I’ve been learning them on my own between teaching, writing, sewing, cooking dinner, reminding my thirteen year old to practice the piano more, paying attention to my media naranja, and walking the dogs. I have had a couple moments of serious doubt while sitting behind my drum set.

I totally don’t want to suck.

I learned the two slower songs right away, but those fast punk rock songs are harder to learn because they’re fast and because it’s a lot harder to hear what’s going on in the songs, what the drummer’s doing during transitions, and to hear the right rhythm of some of the fills. I saw Pat Libby at 1234 Go Records Recently, and he helped me remember that if I suck on one of the fast songs, at least I only have to suck for about two minutes.

Alice did say to go ahead and make the songs my own where the drums were concerned. That was nice and a real comfort, but I don’t want to change the songs too much because I don’t want to throw off the rest of the band who has probably gotten pretty used to playing them a certain way, depending on the drummer as those in a band must do. But here’s another thing — being an old-lady drummer is not as easy as being a youthful twenty-something drummer. At least I don’t have to memorize song lyrics!

There were several years there in my thirties when I didn’t play drums at all. I sold my beat up set when I went back to school, not quite being able to imagine that I’d be in a band again, that I’d have the energy for all of that, that I could handle any more nights tearing down drums, carrying drums, stands, and cymbals, setting them all back up, munching my fingers in the process, tearing them down again, and carrying them back to the van. Writing, school, then graduate school, and my future baby with my media naranja were the only things I could foresee at that point, (and writing a book) though in the back of my mind I knew that if I wanted to play drums again that I could just buy another set. The one I sold was quite old and beaten up and a real cheap set to begin with. I do regret getting rid of my ride cymbal, the heavy Zildjian hammered and lathed one with the super rich sound. That cymbal went with me all over the world a couple of times because it was one of the few I never broke.

I started to play again about five or six years ago when my colleagues and I formed an English department band – we’re like the Weird Al of English department bands. We play covers of songs, changing the lyrics to address whatever community college English instructor woe is most present at the time: the bad budget, revolving door administration, paper grading, convocation, and anti-intellectualism. Being in the Rawk Hawks has been great fun, and my colleagues got me behind a drum set again in our low pressure, two- shows-a-year band. I sing in the band too, trading that duty with Karin Spirn and whoever else wants to sing a song. Richard Dry plays drums too, and he’s a lot better than I am a lot more versatile. Seriously, name a beat and he can play it or figure it out by the next practice.

Over the summer, I took a jazz drumming class because I wanted to learn some new beats too to be more versatile and because I knew Alice Bag might call. The jazz beats I learned won’t help me play punk drums better, but drum lessons, beginning to learn to read drum music, learning about sticking, and having real specific practice goals have helped my drumming overall. It was nice too to see how much of my previous experience playing drums helped me learn quickly and to know that I can continue to improve as a drummer, even as ease toward my fifties.

And that brings me back to Alice Bag, or Alicia Velasquez. When I met her earlier this year, she played with Frightwig – they backed her up. It was wild. My first band Bitch Fight played our first show at Gilman Street with Frightwig. I remember I thought they were scary – all womanly and intense. I was just some young country bumpkin from Tuolumne trying to make a name for myself in the Bay Area. Alice and Frightwig are all about the same age, between eight and twelve years older than I am, and they are out there playing their old songs and writing new ones. Older women rocking out that hard is not what anyone expects, and I know that many people would find it shocking, and odd, and un-old-lady-like (meanwhile, Keith Richards is still revered). For all those reasons, it made me want to cry when I saw Frightwig and Alice get on stage and do what they’re good at, what makes them feel good too.

I don’t want to suck when I play with Alice Bag and her band, but even if I do, it will still be an honor to have been asked.